HOW MANY PLANETS ARE THERE NOW?

But wait a minute, isn’t there something wrong about this statement?

For more, you have to use the DOOR…

Let’s start with some publicly available art this time… (A) This photo just sets the mood here… 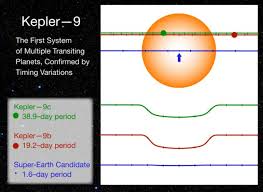 (B) The star is Kepler-9.  Light waves fluctuate as planets pass by.

(C) Explains a bit more of what happens. For example size and orbits of planets in front of much larger stars can be calculated.

Now some text:  On 2 January 2013 astronomers stated that the Milky Way galaxy may contain as many as 400 billion exoplanets, with almost every star hosting at least one planet. *

Hmm.  What’s going on here?
Our first statement said 973.  (When I did the first draft of this it was 942.) These have been observed by recent modern technology.  Obviously, these planets were “out there” before we learned about them.  That’s what made our first statement absurd–or to be kinder, it’s “Earthocentric,” or anthropocentric (what we human earthlings can prove, or make a case for). The “400 billion” is an estimate of what might be.  These have not been seen, and the possibility of being there is based on other information.
•   •   •
Now, building on info we reported on April 19, 2013, we’re updating the number of planets we have evidence for and adding some other information.
•   •   •
So now our chart. (Remember, we had no evidence for any planets beyond our solar system until “1995.”)
•   •   •
Date     Known Planets (planets like the ones that revolve around our star, the Sun)

1. The universe is very, very large.

2. Complex telescopes have been hard at work with new technology.

3. An overwhelming number of these planets are large gaseous balls (think of Jupiter in our solar system).

4. Very, very few are approximately the size and composition of Earth.

5. And of these, very, very few seem to have a “Goldilocks zone,” which is astronomy jargon for having “just right,” neither “too hot or too cold” temperatures, and all other necessary materials and conditions, for any life to exist. (And human life is very demanding!) ****

Reasons To Believe [www.reasons.org] keeps an up-to-date ongoing discussion of scientific advances including discovery of new planets. (For example, see the Sept. 2 post, “Signatures of Life on an Exoplanet” by astrophysicist Jeff Zweerink.)

* The bulk of this info has been conveniently assembled by Wikipedia–so remember that. We’re presenting some overall info here. The picture doesn’t show much; it just came along for the ride. (We’ll see how our site handles this.)

** Please accept “1995” as a round number here. Several pieces of info from that “time” led to the counting and listing of acceptable candidates for exoplanets that’s now firmly established.

*** That’s my conclusion after looking over several sites. There’s info all over about this. One blog/website that might be useful in first looking at exoplanets is http://www.planetary.org/blogs/emily-lakdawalla/2013/01081643-aas-exoplanets.html

Want to Read More from John

The Blood of Three Worlds

Earth Is Not Alone

A Pillar of Pepper